I decided to stay at the Sheraton Maria Isabel Hotel & Towers because it was closer to the Zona Rosa neighborhood which is a touristy destination packed with restaurants, bars, and nightlife. It’s considered the gay area of Mexico City, but there are plenty of straight things to do. I took a regular cab from the W Mexico City to the Sheraton Maria Isabel hotel which was 70 pesos and a 10 minute ride through the famous Avenida Paseo de La Reforma. Beware of taking the hotel cab because the fares are usually 2-3 times more than the regular taxis. I scored an awesome rate of $88+ tax using Starwood’s Best Rate Guarantee and I will have an upcoming post on how to search for those great BRG rates.

From the exterior, the hotel looks like any standard Sheraton in North America. Once you step inside the Sheraton Maria Isabel Hotel and Towers, it feels very ornate and historic. I checked my SPG app prior to checking in and saw that there were many suites available at this hotel. There is a regular room section with suites and also a towers section which also includes suite availability. I booked a standard room and inquired at check-in about the possibility of a suite upgrade. The agent said there is a junior suite available, but it has two queen beds. I asked him to check the towers, but he said the tower suites are off limits to the hotel in terms of upgrades. He claimed that the towers section is a whole different part of the hotel and acted like another company ran it. I was happy to have been upgraded to something better than a standard room, so I accepted the junior suite. As a Platinum member, I chose the 500 Starpoints since this hotel has a lounge for evening hors d’oeurves and breakfast in the morning. Ironically, the lounge is located in the towers section of the hotel. 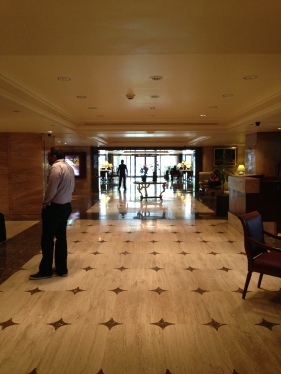 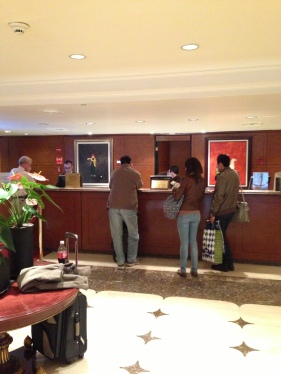 As I entered the room, I was ecstatic on how spacious the junior suite was. I checked on spg.com and saw that the junior suite with two queen beds is actually larger than the tower suite rooms! There was so much space that you can literally put a dry wall in between the living room and the bedroom TV area and call it a 1 bedroom suite.

There is also a breakfast bar area with two chairs.

There were a ton of standard Sheraton amenities that can be found in the bathroom area. 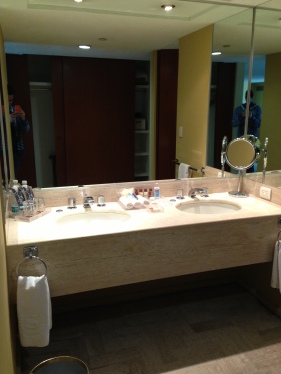 As I settled into the room, I received a phone call from the butler offering me a welcome drink. I opted for a mimosa and he brought up fresh fruits, water, champagne, and orange juice. He also asked if I needed anything items of clothing pressed, which I politely declined. I didn’t know I had a butler included in my rate, but that is usually reserved for the towers section of the Sheraton Maria Isabel. 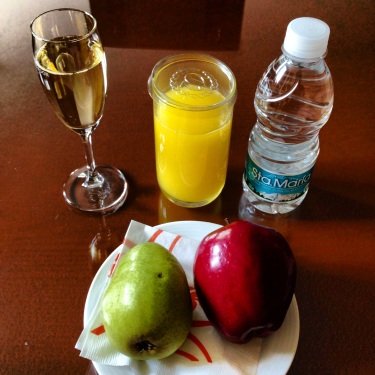 I was advised the hotel lounge for the evening hors d’oeuvers was closed but was moved to the Lobby Bar. The lobby bar area of the Sheraton is very exquisite. It feels like a W Living Room, but with standard Sheraton furniture. 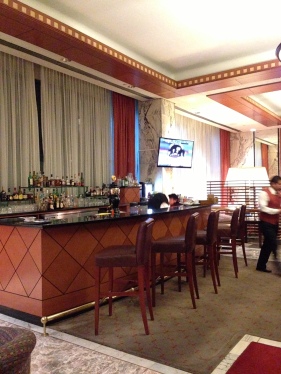 There was a small selection of small bites to choose from including dessert. 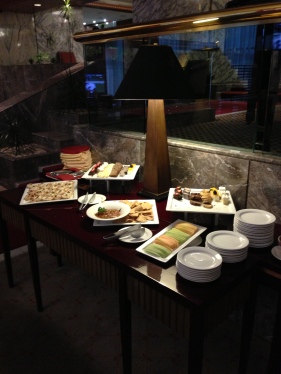 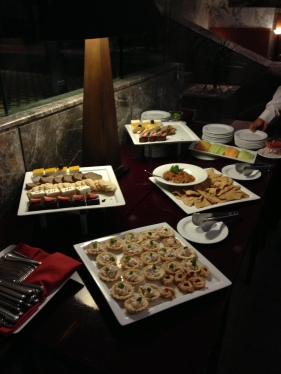 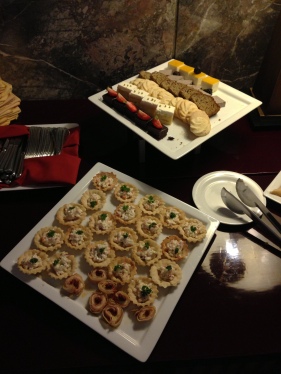 As I sat down, I was approached by a waiter who asked what I would like to drink and I chose a coca-cola.

After finishing my light meal, I was handed a bill which was the cost of the small coke. I inquired about this charge and he said it was complimentary, but that I needed to sign for it any way. Needless to say, the charges never ended up on the final bill and I guess they need to take inventory of everything consumed.

There is so much to do around the Sheraton Maria Isabel Hotel & Towers! First of all, I always try to avoid taxis if there is nearby public transportation. In this case, there is a close by subway metro stop called Insurgentes. Within walking distance, there are a ton of shopping and restaurants. Across the street and a 4 minute walk from the hotel, you can find the famous Zona Rosa neighborhood where you can find cheap Mexican food and do plenty of shopping. Within a 10 minute walk from the hotel, you can reach a large shopping mall which also has dining called Reforma 222. I felt really safe walking around Mexico City at all times, even during the seedy midnight hours.

I decided to have breakfast at the lounge which was open on Monday morning. The lounge has an extensive hot and cold breakfast buffet option.

I was super hungry, so I decided to try to have a big breakfast and I selected the following: 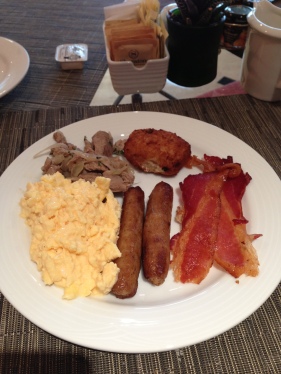